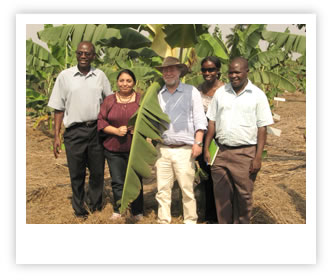 Bananas are one of the major food crops of the world. In developed countries, they are consumed primarily raw and as a dessert fruit.

However, in the developing countries of the tropics and sub-tropics, bananas assume a much greater importance. In a number of countries and regions such as Uganda, they are the staple food and form the major starch source. The "staple food" bananas are not eaten raw but are cooked usually by either steaming, frying or roasting. These are banana groups known as cooking bananas and plantains. In most countries of the wet tropics and sub-tropics, even where bananas are not the major starch source, they are an important component of diets. They are a significant food security crop as they are perennials and can withstand quite lengthy dry periods where annual crops may fail completely. This is becoming an increasing valuable trait with climate change causing more variable rainfall patterns.

Genetic improvement of bananas is essential if this incredibly valuable food crop is to continue to make major contributions to food security in the future. Our approach to improving bananas is through genetic modification either alone or in combination with conventional breeding. 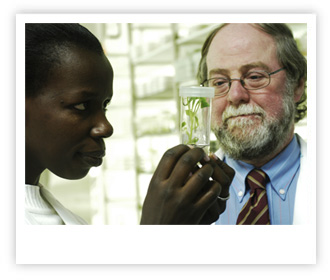 In 2005, the Centre for Tropical Crops and Biocommodities (now known as the Centre for Agriculture and the Bioeconomy) at Queensland University of Technology in Australia and the National Banana Research Program of the National Agricultural Research Organisation of Uganda were funded by the Bill & Melinda Gates Foundation as part of the Grand Challenges in Global Health program. This project is to tackle micronutrient deficiencies In Uganda through increasing the levels of pro-vitamin A and iron in the fruit of the staple food of Uganda, the East African Highland banana. This was the genesis of Banana21.

Since then, Banana21 has expanded the scope of the projects to include disease control and drought tolerance and a number of other collaborators have joined. Banana21 is also committed to training the next generation of banana biotechnologists and currently we have seven students enrolled in PhD programs. We trust that you will find this website useful and we encourage your interaction and perhaps in the future your collaboration.