Banana production worldwide, whether it is large commercial plantations or small holder subsistence farms, is limited by a range of diseases caused by fungi, viruses, bacteria and nematodes. 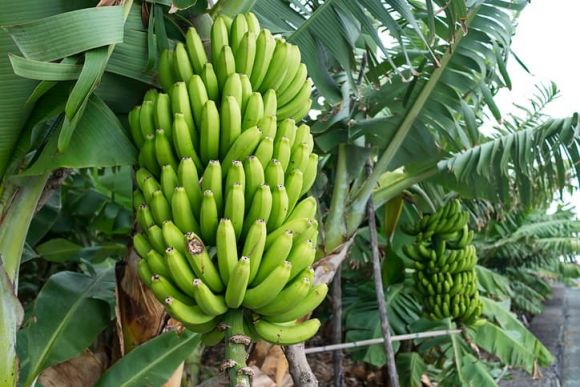 The fungal diseases include black and yellow Sigatoka and Fusarium wilt, the virus disease bunchy top and banana streak and the bacterial diseases banana Xanthomonas wilt and Moko. The disease challenges for bananas are that they are vegetatively propagated so diseases can move around in infected planting material and few resistant acceptable cultivars have been developed through conventional breeding due to the near sterility of accepted cultivars.

Banana21 is very active in developing methods for the control of banana diseases. These activities include developing resistance to Fusarium wilt and banana bunchy top through genetic modification and developing virus diagnostics to support the dissemination of disease free banana planting material.

Fusarium wilt is a destructive disease of banana which threatens global production. It is caused by the fungus Fusarium oxysporum fsp cubense or FOC for short. It is a soil-borne fungus that infects bananas through their roots. It moves relatively slowly in the soil but can be moved long distances in infected planting material, irrigation and runoff water and in soil attached to machinery or footwear. Importantly, it can remain in soil for decades even in the absence of bananas. FOC is divided into races based on the different cultivars each race infects. The most important races are Race 1 and (Tropical) Race 4 or TR4. Race 1 is ubiquitous in banana growing regions and has historically had a major impact on commercial banana production. This fungus was the reason the major banana producing companies changed from susceptible Gros Michel to resistant Cavendish. Both Cavendish and East African Highland Bananas are resistant to FOC Race 1 but Lady finger in Australia and Sukali Ndizi in Uganda are susceptible as are many other cultivars. TR4 is very different. It has a relatively limited geographical distribution through Darwin in Australia and south east Asia. However, it is a much more serious threat as it infects most cultivars including Cavendish.

There are currently no accepted effective methods available for controlling Fusarium wilt other than resistance and it is now generally considered that genetic modification is a very attractive strategy to generate resistant bananas. At QUT, we have been initially developing Fusarium wilt resistance in the Lady finger cultivar by genetically modifying plants with stress tolerance genes that block programmed cell death (apoptosis) in the plant based on the assumption that FOC infects by killing and then colonising cells. We have generated several Lady finger lines which have a very high level of resistance to FOC Race 1 in glasshouse trials (Paul et al, 2011). This technology is being transferred to NARO and exploited in the favourite dessert banana of Uganda, Sukali Ndizi. We also expect that this strategy will also be effective against both FOC sub-tropical and tropical Race 4 (TR4). We have recently established a field trial in TR4 infested farmers' fields near Darwin in the Northern Territory of Australia. This trial will evaluate both Cavendish and Lady finger expressing either stress tolerance genes for R genes isolated from a TR4 resistant wild banana diploid.

Banana bunchy top is regarded as the most important viral disease of banana, causing significant yield losses worldwide. The disease is caused by Banana bunchy top virus (BBTV), which is a circular ssDNA virus belonging to the genus Babuvirus in the family Nanoviridae. The virus is transmitted from plant to plant by aphids and is also transmitted through infected planting material. The disease is present in most of the banana growing areas of Asia with notable exceptions of Thailand and Malaysia, a number of countries in sub-Saharan Africa but not Uganda, Kenya or Tanzania and also Hawaii but nowhere else in the Americas.
There are currently few effective conventional control strategies for the virus. As such, transgenic virus resistance is now considered the most appropriate strategy to control BBTV. We are planning to use two approaches to develop transgenic resistance to this virus. Firstly, we have been developing a novel transgenic strategy termed In Plant Activation (InPAct). This strategy exploits the rolling circle replication mechanism of ssDNA viruses such as BBTV and is based on the activation of a suicide gene cassette specifically in the presence of the BBTV Rep protein produced upon virus infection. The second approach we will use is RNA interference (RNAi)-mediated resistance. RNAi is a sequence-specific RNA degradation mechanism triggered by the presence of dsRNA. In this approach, we will transform bananas with RNAi hairpin constructs targeting several different coding and non-coding BBTV sequences.

Viruses are major constraints to banana production worldwide. Several economically important viruses, including Banana bunchy top virus (BBTV), Banana bract mosaic virus (BBrMV), and a number of recognised badnaviruses infect bananas. As part of a Bill and Melinda Gates Foundation Grand Challenges in Global Health project to improve the micronutrient content of banana we are working to develop a diagnostic capacity for banana virus-indexing in East Africa. Together with project partners in Uganda, Kenya and Tanzania we have developed indexing protocols for a number of viruses, including a novel rolling-circle amplification-based assay for the detection of badnaviruses. A major focus of the project is the establishment of indexing centres in each country with the capacity to undertake banana virus diagnostics. Additional activities include surveying widely in these countries to investigate the occurrence of viruses in banana, validate diagnostic tests on local virus isolates and characterise new virus isolates/species. The capacity to undertake virus indexing within East Africa will allow access to certified virus-indexed germplasm within the region and strengthen measures to control virus diseases in banana.

Please feel free to contact us should you have any queries regarding Banana21.

For more information about where we are located please visit our contact page.